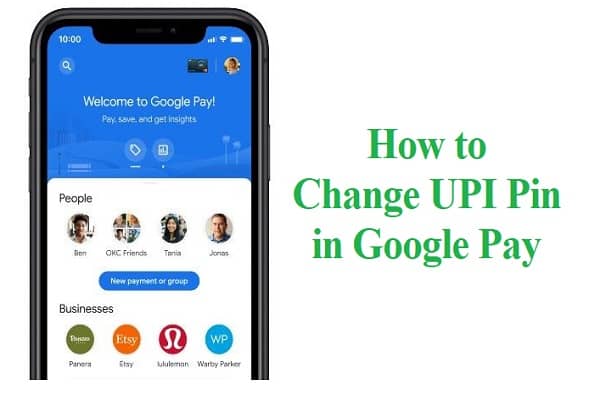 Google Pay is one of the most popular digital payment platforms in India. It is used by millions of people to make transactions every day. In this blog post, we will discuss how to change UPI pin in Google Pay. We will also talk about why it is important to change your Google Pay UPI pin regularly. Stay tuned!

Google Pay is a great way to make payments quickly and easily without having to carry around any extra cards or cash. However, it’s important to remember that like with any other account, your Google Pay UPI pin is essential for keeping your information safe. Make sure to keep your pin code confidential and to follow these tips when changing or setting it up!

Why to change the Google Pay UPI pin?

Changing your Google Pay UPI pin is very important. If you don’t change it regularly, someone could access your account and make transactions without your permission. Moreover, if you use the same Google Pay UPI pin for multiple accounts, it could lead to security issues.

When changing or setting up a new pin code on Google Pay, make sure to keep it secret and use different numbers than those used on other accounts. This will help keep your account safe and secure.

– To prevent someone from accessing your account without permission

– To keep your personal information safe

– To make sure that no one can use the pin code to withdraw or transfer money from any account linked with Google Pay without authorization. We recommend changing it every six months or so as a precautionary measure because even if someone gets hold of this number they won’t be able to access all those accounts unless they know your current pin code.

– To keep up with new security measures such as Mobile PIN Lock (MPL) which require users to enter their four digit passcode before making any transactions online or over the phone.

So, how do you change your Google Pay UPI pin? It’s actually very simple. Just follow these steps:

Open the Google Pay app and tap on the three lines in the top left corner of the screen. Select ‘Settings’ from the menu. Tap on ‘UPI PIN’. Enter your current UPI PIN and then select ‘Change PIN’. Enter a new UPI PIN twice to confirm it.

If you want to change your Google Pay UPI pin, just follow these steps. You can also set up a new one if you don’t have one yet by following the same procedure but selecting ‘Set PIN’ instead when prompted for your current UPI PIN.

When changing or setting up a new pin code on Google Pay, there are some tips that will help keep it secure: Make sure not to share this information with anyone else who might use the app so they can’t log into their own account from yours! Also try using different numbers than those used on other accounts such as credit card or bank accounts which could be stolen and used against you later down the road.

Conclusion: If you want to change your Google Pay UPI pin, follow these steps. You can also set up a new one if you don’t have one yet by following the same procedure but selecting ‘Set PIN’ instead when prompted for your current UPI PIN.