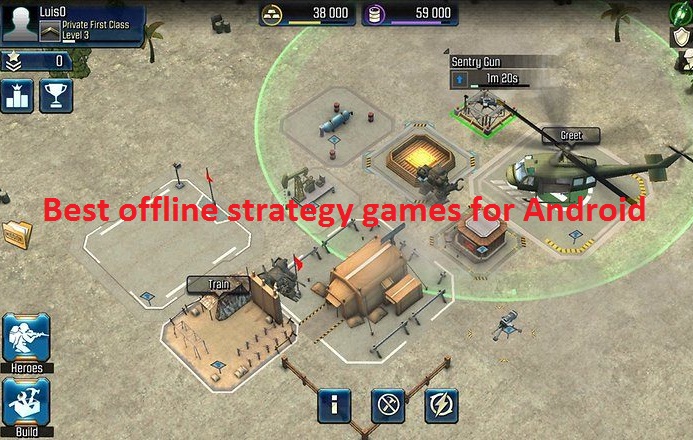 If you prefer to play the most popular and best offline strategy games for Android 2020 on your mobile phone or tablet then we will guide you with some suggestions. Strategy games can play and required with mental awareness stimulation and high-level of thinking. It is good for young, old, or for everyone to play. To be frank, there are numerous games available through the online platform to play games but only a few of them can download to play offline.

Strategy video games will provide an opportunity for the gamer lover’s to mingle within the game’s character and the world that allows them to discover new aspects to work on. A few games will encourage people and resource management while others will offer wartime battle planning & techniques along with exploring the city building. To play the strategy games through the online platform, you should have a stable and good internet connection but it would fun while playing offline games on your gaming consoles, PC, and mobile devices.

You can find below the list of best Offline Strategy games for Android 2020:

Warfare Incorporated is one among the amazing and best offline strategy games for Android devices. This offline game is specially designed only for Android mobile phones. You can play this game as a Commander in chief role to fight against the opponents and also get great pleasure during the gameplay. It is requiring to develop the entire skills along with leadership skills.

You must have a strategy with logical thinking to confront your opponent army very effectively. The creators form a team with their preferred set of large soldiers as possible. You will be placed within the future to achieve the missing resources and precious after several struggles among the multiple organizations. During the gameplay, you will understand the new planet named Icarus, where they will conduct excavations.

This is a classic strategy which requires self-respective amateur of each RTS has to play.

Tentacle Wars is the best and peculiar offline strategy Android game that does not have any analogs within the gaming industry. With the bright mix of Tentacle Wars game, it can offer sci-fi action, reaction speed test, and puzzle mode. Under the alien creature’s body, you can perform all the events. The entire cells will mutate while it was attacked by the dangerous virus. At your disposal, the patient’s body can try to heal by utilizing the last healthy cell throughout the 80 episodes.

Your Android mobile phone’s touchscreen will carry out the Tentacle Wars management and your gameplay will be based on capturing the enemy cells along with their respective special tentacles. While progressing within the game, you have to play more complex levels. The enemy cells with passive infection are replacing by aggressive invader cells and the plays have to defend them against their opponent’s tentacles.

This game is worth enough to offer excellent musical accompaniment and visual design. The dramatic and dark atmosphere is developed by the designers along with a complement of providing bright special effects. Tentacle Wars game is always loved by science fiction fans & dynamic puzzles fans which prefer them to download offline strategy game on Android devices. You have to play numerous levels within the atmospheric world until you save the alien from its terrible contagion.

The best offline strategy games for Android with its representatives are referred to as Plague Inc. This game is purely based on the real plague simulator that needs protect from your country and yourself from any unexpected contagion or stop spreading across the world. You can download Android offline strategy games to experience the new sensations. This is a different kind of strategy where the player has to fight against the entire mankind.

With its game popularity, the information about the project was already broadcasted on all the leading publications across the globe. Even from the New York post to the Guardian. The strategy game offers stunning graphics will helps to stop spreading the plague disease around the world. It is not so simple and needs to fight against the disease and retain humanity. For the Android version, the Plague game is presenting with 7 different varieties of diseases.

The game contains 5 special mutations which will automatically turn the people into monkeys. But your mission is not to allow the Earth to replace with the notorious planet (where Apes can live). You can play the game to track down the epidemics and keep them under your control. Furthermore, the overall rating of this game is gorgeous from its initial idea until its ending implementation.

Star Command is named for its offline strategy game for android mobile phone. It offers to their users with various opportunities to have a lot of impressions and play the game for a long period within the process. The customer will provide various tasks to the player and its associated peer team to engage and take responsibility to complete the implementation.

You will assign as a Commander of your Crew and Starship. Your assigned tasks are such as improving the starship, monitoring your crew, and properly completing the assigned missions. This genre of gameplay will impress the fans to utilize the excellent 8-bit amazing features along with unique gameplay. You will find a wide range of activities and opportunities within the Star Command game. There are so many factors that will obstacle the players to achieve their assigned actions.

The salient features of Star Command game include influencing the player’s mood, improve the communication ability with the peer crew members. Also, changing the game situation, and switching over the characteristics that are available within the starship. The player has to fend off the raiders and space pirates, need to deal with the ship captain about the affairs, and explore the entire space. You can hire and train the crew members with the help of improved systems for defending and attacking.

Galaxy Legend, the well-known offline strategy games for Android 2020 that allows the user to play the game in offline mode. The game developers allow the user to do the entire planning and implementation of the space colony to flourish and develop it properly. This gameplay is similar when compared with the strategic genre of typical representatives. It allows the users to enjoy their entire joy within this space game.

It is your role to manage your entire own space base. And, also complete your leadership tasks by constantly developing the space base. The game will provide an extremely diverse mission in both forms of combat and exploratory. Within the game, it is requiring to meet the cruel space pirates and as well as interesting heroes. You will enjoy the game utmost with the available characters and amazing graphics.

Galaxy legend offline strategy game is available for download in the Google Play Store. Also, you can find it in various trustworthy websites. Moreover, it is necessary to check the web links before downloading the game on your Android mobile phone to avoid any unwanted risks.

You may also like: How to install Asphalt 8 Airborne Mod APK on Android