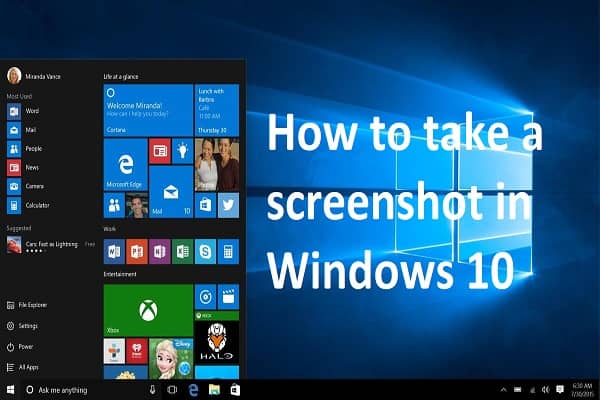 A Screenshot is also referred to as a screen grab or screen capture; your computer display will show its content as a digital image. It is one of the common screenshots that is created by the software executing on your device or the operating system. The screen capture or screenshot is also created by capturing an image of your computer screen. Your computer’s desktop screen is saved in the format of a graphics file.

Numerous programs are available across the online platform for capturing the screenshots and much easier to perform without using any special software or program. If you prefer to take a screenshot of your computer desktop screen or any other screens then Windows 10 operating system will offer various methods to perform this task. There are multiple common techniques to be followed for taking a specific part of your screen or entire screen of your Windows 10 desktop. Here, you can read more tech articles on this site by click here.

The simplest and easiest method to save your Windows computer screen is by simply pressing the “PrtScn – Print Screen” key on your keyboard. This PrtScn key is located near the top right-hand side corner or even near the Function (F) keys. A few keyboards will prompt the users to press the PrtScn key (Print Screen) along with the Function keys to capture the Windows screen. It will copy the entire screen or information to the clipboard and paste the same to other applications. It is also possible to utilize several modifier keys for changing the key work process.

PrtScn + Windows Keys – This key combination will capture the entire screen and save as an image file. It is possible to browse and locate the images under the Screenshots subfolder under the “Pictures” main folder.

Windows Key + Shift Key + S Key – It will change the mouse pointer and also dim the screen. You can drag the mouse to choose your preferred or specific screen portion to take a screenshot. It will copy the information to the clipboard and paste the same to another application or program. This key combination will work only for Windows 10 latest version and commonly referred to as Windows 10 Creators Update.

PrtScn + Alt Key – You can use the PrtScn + Alt key combination to capture a quick snapshot of your active window screen. It will copy the information to the clipboard and need to access an image editor program or application to save it.

PrtScn Key – Simply pressing this key (PrtScn) will copy the entire desktop or active window screen to the clipboard. Users can paste the same to any applications or programs to display images such as Microsoft Word, MS Paint, etc.

Take a Screenshot using the Game Bar on Windows 10 OS

The overlay option named as Game Bar can be used within the Windows games to record videos and as well as capture the screenshots. Follow the below instructions to take a screenshot using the Game Bar feature:

It will automatically save the screenshot to the “Captures” subfolder under the “Videos” main folder. If you are using a Steam to play the game then press the F11 key to grab a screenshot. Under the Screenshots folder on Steam, you can view the screenshot.

If you are working in a Microsoft Surface device and utilize the physical buttons to grab the entire screenshot. It is similar to capture a screenshot on your tablet or mobile phone. To perform this task, you can press & hold the Windows Logo key on the Microsoft Surface device screen and simultaneously press the Volume down key to take a screenshot. It will dim the screen briefly and automatically save the screenshot to the “Screenshots” subfolder under the “Pictures” folder.

It is much easier to access and also share the screenshots using the Snip & Sketch tool program. However, it lacks some important features when compared to the Snipping Tool program. Access the New icon within the Snip & Sketch window and initiate the screen capture using the upper-left button. The window will automatically disappear and place a tiny menu near the top right-side screen corner and allow the user to select the screenshot type of their preferred ones like full-screen, free-form, or rectangular.

When compared to the Snipping Tool program, it is not possible to take a screenshot of your desktop window or screen. Make use of the down-arrow icon and press the New icon within the Snip & Sketch window for a time delay for 3 to 10 seconds. Once it is done, the screenshot will automatically load to your Snip & Sketch Tool. It is much easier to annotate the screenshot using the pen, pencil, or even other tools that are located near the top right side of the window. You can also copy the screenshot to the clipboard for easy annotations.

It is also possible to utilize the Command prompt program to grab a screenshot on your Windows 10 operating system. This is another easier and quicker method to follow for taking a screenshot. Follow the below-provided instructions:

Drive field can be used to replace with your preferred drive (for e.g. C, D, or E) and the “examplescreenshot.png” filename can be replaced with your favorite name to save the screenshot. You can find this free utility from any one of the trustworthy websites or reliable sources.